Today I’m experimenting (again) with another form of content creation and delivery. An audio podcast. 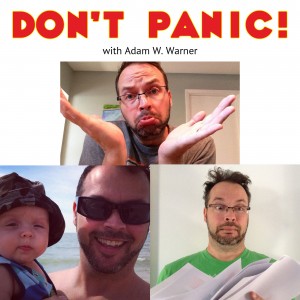 I used to consider myself an artist. I used to write poetry, draw, paint and create things that didn’t previously exist. It was a way for me to express myself and “get it out of my head”, good or bad.

Looking back, I think it was also a way to relieve stress and simply be happy doing something other than what was expected of me by others.

Creating websites used to fill that void, but for the past couple of years it’s been less about building something new and more about just keeping the business running.

In the end, I made the decision to talk about whatever it is that was on my mind when I record an episode. Afterall, I think about building my business, and my kids, and my family, and my health, and my this and my that all the time. Why not use that as fodder for my content?

It just makes sense because I know me. I know that if I try to create content (or art) that I’m not passionate about, I’ll lose interest and move on to the next shiny object.

I suffer from too many ideas, not enough time in the day syndrome. Add to this the responsibilities of having two young kids.

I can barely find enough free time to brush my teeth each day. Sound familiar?

How in the hell do I expect to find time to create more blog posts or shoot and edit video?

The answer is that I won’t, and more blog posts and a video podcast would fail.

This is also something that I went back and forth on for awhile, but thanks to my friends Matt, Kim, and Robin who helped me brainstorm and drill down to a name that is catchy enough to gain some interest, but also meaningful enough to cover my somewhat varied topics.

If you don’t understand the “Don’t Panic!” reference, it’s a direct quote from the Hitchhiker’s Guide to the Galaxy book series by Douglas Adams.

I read this series of books in high school and for whatever reason, the story just really stuck with me. It’s a humorous adventure through Space and time with a great cast of characters, but also makes some great points about “Life, the Universe and Everything”.

The words “Don’t Panic!” also sum up what I’m currently focusing on and that’s to not get too stressed each day and be more calm. Running a business, keeping up with the household chores (like simply mowing the lawn), and managing the ever-changing schedule of wife and kids kind of threw me for a loop.

I’m a planner. In order to keep my mind focused, I like to know what’s coming two or three steps ahead. This has mostly gone out the window these days, so the words “Don’t Panic!” mean a lot and help me keep things in perspective.

I’m also 42 years old, and this number has special significance in the book series above (if you haven’t read the series and intend to, don’t Google it because you’ll ruin the fun!)

This is still an experiment. You’re going to see things like the transcription below (complete with typos and mashed together text for now) and probably other additions/deletions on this site as I piece together the technical aspects of this little vision of mine.

Will I continue? Will I monetize this someday?

I have some ideas, but I am committed to focusing on ONE THING and that’s just creating my “art”.

You have Successfully Subscribed!

This site uses Akismet to reduce spam. Learn how your comment data is processed.

Dive straight into the feedback!Login below and you can start commenting using your own user instantly